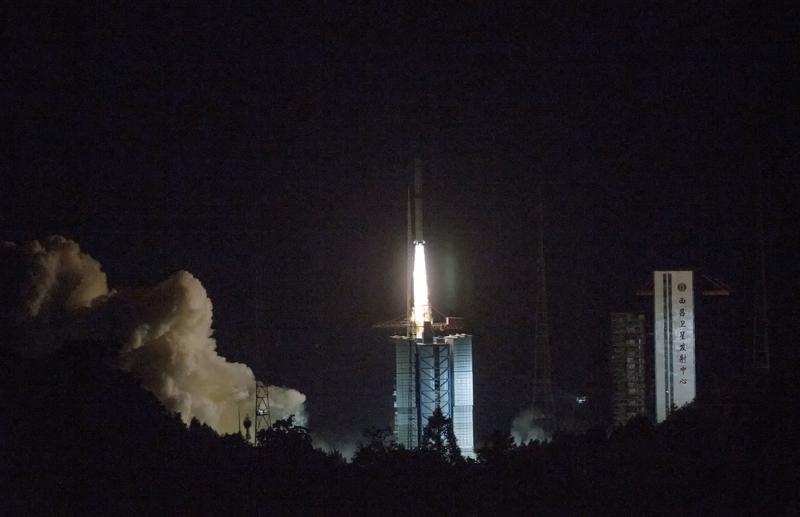 XICHANG - China launched a relay satellite early Monday to set up a communication link between Earth and the planned Chang'e-4 lunar probe that will explore the mysterious far side of Moon, which can not be seen from Earth.

The satellite, named Queqiao (Magpie Bridge), was carried by a Long March-4C rocket that blasted off at 5:28 am (2128 GMT) from southwest China's Xichang Satellite Launch Center, according to the China National Space Administration (CNSA).

Queqiao is expected to enter a halo orbit around the second Lagrangian (L2) point of the Earth-Moon system, about 455,000 km from the Earth, becoming the world's first communication satellite operating in that orbit

"The launch is a key step for China to realize its goal of being the first country to send a probe to soft-land on and rove the far side of the Moon," said Zhang Lihua, manager of the relay satellite project.

About 25 minutes after liftoff, the satellite separated from the rocket and entered an Earth-Moon transfer orbit with the perigee at 200 km and the apogee at about 400,000 km. The solar panels and the communication antennas were unfolded.

Queqiao is expected to enter a halo orbit around the second Lagrangian (L2) point of the Earth-Moon system, about 455,000 km from the Earth. It will be the world's first communication satellite operating in that orbit.

But the mission must overcome many challenges, including multiple adjustments to its orbit and braking near the Moon and taking advantage of the lunar gravity, Zhang said.

In a Chinese folktale, magpies form a bridge with their wings on the seventh night of the seventh month of the lunar calendar to enable Zhi Nu, the seventh daughter of the Goddess of Heaven, to cross and meet her beloved husband, separated from her by the Milky Way.

Chinese scientists and engineers hope the Queqiao satellite will form a communication bridge between controllers on Earth and the far side of the Moon where the Chang'e-4 lunar probe is expected to touch down later this year.

Monday's launch was the 275th mission of the Long March rocket series.