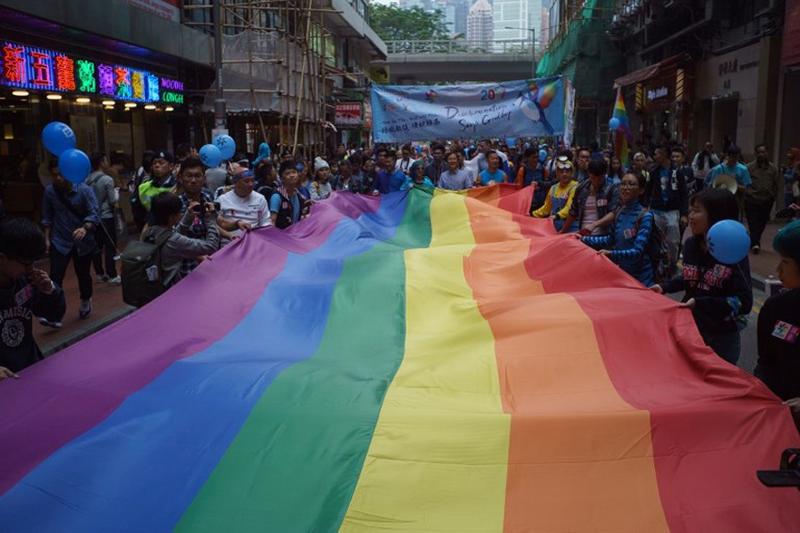 In this Nov 25, 2017 photo, a giant rainbow flag is displayed during Hong Kong's annual pride parade. Fifteen financial institutions are supporting a British woman who sued after being denied a visa as a dependent of her same-sex civil partner. (AARON TAM / AFP)

When Patrick Sinclair and his husband, Marty Forth, moved to Hong Kong, they took a step back in time.

Hong Kong doesn’t recognize same-sex marriage or civil partnerships. That meant Sinclair, a former assistant US attorney in New York who was joining a multinational law firm, couldn’t sponsor Forth for the visa that opposite-sex spouses typically receive. Instead, Forth entered Hong Kong as a visitor and had to make cross-border trips to avoid overstaying his short-term visa. He also couldn’t get a job or join a business, according to Immigration Department rules for visitors.

“There’s an emotional toll to it,” Forth says. “You’re not counted. You’re not included.”

We’re a global organization that moves talent around the world…Limiting our access to the best talent is not in our best interest.

As they fight against their second-class status, LGBT people in Hong Kong have allies in the city’s crucial financial sector. Goldman Sachs Group, BlackRock, and Deutsche Bank are among 15 financial institutions that have filed an application with the city’s high court in a landmark case on LGBT rights, according to a statement released on April 12 by Davis Polk & Wardwell, the law firm representing them and where Sinclair is a partner. (He isn’t working on the case.)

The companies are supporting a British woman who sued after being denied a visa as a dependent of her same-sex civil partner. She won a court ruling in her favor, but the government is appealing it.

It’s not just faraway places in the West that are extending marriage rights: Australia legalized same-sex marriage in December, and Taiwan’s constitutional court last year gave lawmakers a 2019 deadline to do the same.

Hong Kong is at risk of falling behind, says Steven Chan, a managing director at State Street Corp, another member of the group. “To retain its competitiveness, Hong Kong really needs to create a diverse, open society, and that means including equal rights and protection for LGBT people.”

LGBT people and their allies are making slow progress in the wider population of Hong Kong, which promotes itself as “Asia’s World City,” a multicultural business and financial center. A 2016 report sponsored by the city’s Equal Opportunities Commission said LGBT people reported extensive discrimination, in settings ranging from the workplace to housing to restaurants. The same report also found 56 percent of survey respondents supported anti-discrimination legislation on the basis of sexual orientation, gender identity, and intersex status, almost twice the level of support as a decade earlier.

Global financial institutions have sponsored LGBT networking events and ally groups in Hong Kong, as well as the annual Pride Parade. The big banks argue that the government’s stance on marriage equality complicates their ability to operate in Hong Kong. “We’re a global organization that moves talent around the world,” says Bruce Larson, head of human capital management in the Asia-Pacific region for Goldman Sachs. “Limiting our access to the best talent is not in our best interest.” 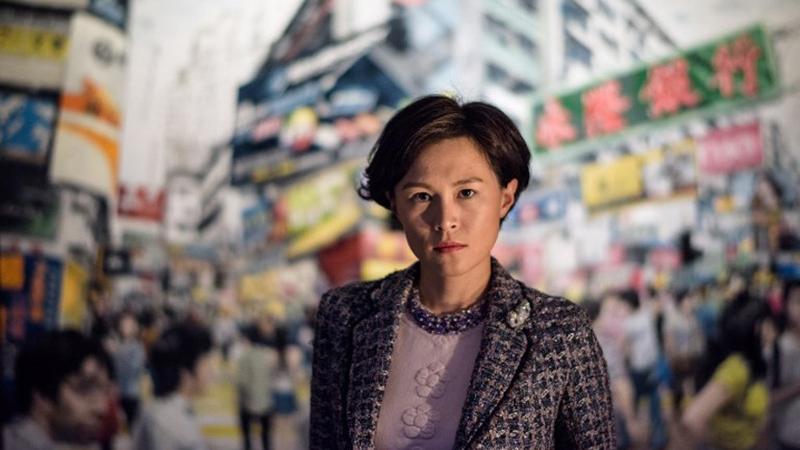 In this March 23, 2017 photo, LGBT campaigner Gigi Chao poses for a portrait in Hong Kong. Daughter of a property tycoon, Chao has is not only one of Hong Kong's richest women, she is also the most recognizable face campaigning for LGBT rights in the city. (ANTHONY WALLACE / AFP)

The lack of equality drives some people away from the city. Cotter Christian, who was a professor at the Savannah College of Art and Design, transferred to the school’s Hong Kong campus in 2013. His husband, Josh Erdman, had owned a bakery in Georgia but with just a tourist visa couldn’t get regular work in Hong Kong. Within three years, the couple left for New York, and Christian says he would recommend gay couples think twice about accepting a transfer to Hong Kong and having their marriages snubbed. “Because we now know what we can have, why would we go somewhere where we’re giving that up?” he says.

ALSO READ: Stop any form of discrimination against sexual minorities

“Our society is divided,” says Regina Ip, a representative in the legislature and a member of the Executive Council. “There are some bastions of conservative opinion, but I think the younger and well-educated sectors are aware of the global changes taking place.”

Unlike most other politicians aligned with the government, Ip is a vocal supporter of LGBT rights. The government as a whole isn’t budging on legalizing same-sex marriage. “I’m afraid for the time being, this remains a highly sensitive and controversial subject,” Lam said at a conference hosted by Bloomberg in Hong Kong on April 11.

Outside pressure has spurred changes in the past: After talks with representatives of foreign governments, Hong Kong in 2016 began allowing same-sex spouses and partners of consular officials to stay in the city. For now, the best most other same-sex couples can get is a longer extension of the visitor visa. For instance, instead of the usual three-month visa, Forth got six months after he and Sinclair presented proof of their relationship, including statements of their joint bank account in the US and pictures from their wedding.

After about 18 months on what he calls “the gay visa,” Forth enrolled in a doctoral program at the University of Hong Kong’s department of social work and social administration and now has a longer-term visa.

“We knew there were going to be difficulties but were confident we would be able to work them out,” Sinclair says. “We are incredibly fortunate. For others, it’s a totally different environment.”